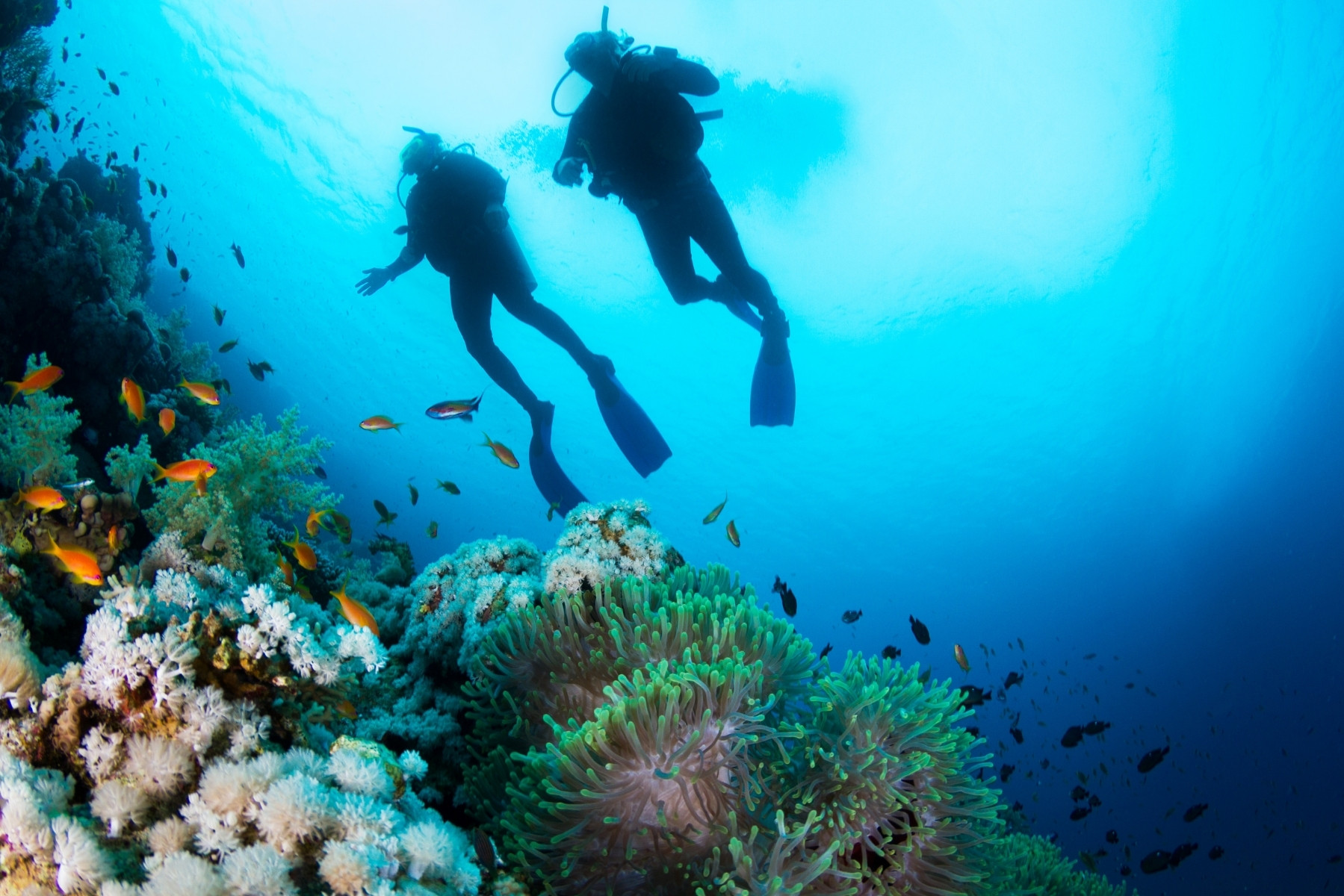 But with so many prime dive locations, it can be hard to decide where to jump in first. So to get you started, we’re showcasing five of the best diving and snorkeling spots in the BVI’s to check out while on your charter vacation.

The Wreck of RMS Rhone

Once a luxurious iron-hulled, double-masted, sailor-steamer ship, the RMS Rhone boasted 253 elegant first-class cabins. She now sets just off the coast of Salt Island in 30-80 ft of water and entices divers to explore her grand deck railings, massive 6-foot propellor, black and white checkered floor tiles, and even a silver spoon now encrusted into the wreck itself.

The wreck can even be enjoyed by snorkelers. In fact, the best perspective of the sheer grandness of the wreck may be from the surface.

Known for its healthy coral gardens, the Ginger Steps is a topographical treasure-chest of marine life. A series of three large ledges provide divers of all levels with wall-dive-like experiences.

Sun reflecting off two large white sand arenas light up the surrounding coral and ledges, allowing divers to peak in the crevices for octopus, eels, shy tropical fish, and lazy sharks. Underwater photographers appreciate the colorful coral and exceptional lighting—it’s some of the best in the BVI’s.

The Chimney and Fishbowl

The Chimney offers one of the most diverse sea life dives available to novice divers.

Dropping into the ‘fishbowl’, you’ll likely find a swarm of zingy blue tangs, yellowtail snapper, rainbow-touting parrotfish, and pink dotted strawberry groupers. They make their home in and around the massive coral heads that bloom from the seabed.

Diving on, you find canyons, ridges, and arches decorated with corals and sponges. Two enormous boulders create a narrow canyon for which the site is named.

The Indians is one the best spots for snorkelers and novice divers to safely experience large, pelagic marine life because of the nearby drop-off.

This shallow dive is brimming with tropical life, giant purple fans, and domed brain corals. But, for the most diversity, make sure to make it around the north side.

Plus, the short underwater tunnel can be a fun way to show off your new underwater confidence.

This is a dive for divers. The potential for swell and current keep this treasure of a dive from making it onto the most frequently visited lists—which might be precisely what you are looking for.

Experienced open water divers will be rewarded for their up-current swim through a shallow, underwater passage with a 360-degree drift dive back around the rock, accompanying boulders, and dramatic formations. In the spring and summer, a narrow canyon is frequently packed with huge schools of tarpon.

As you come back around through the shallow coral gardens, the marine life sightings continue with sharks, moray eels, groupers, turtles, octopi, and schools of squid, all frequent sights.

Ready to explore some of the best diving and snorkeling in the BVI’s for yourself? Grab your waterproof camera!

How a Yacht Charter Broker Will Benefit Your Vacation

The Top 5 Best Beach Bars in the Caribbean