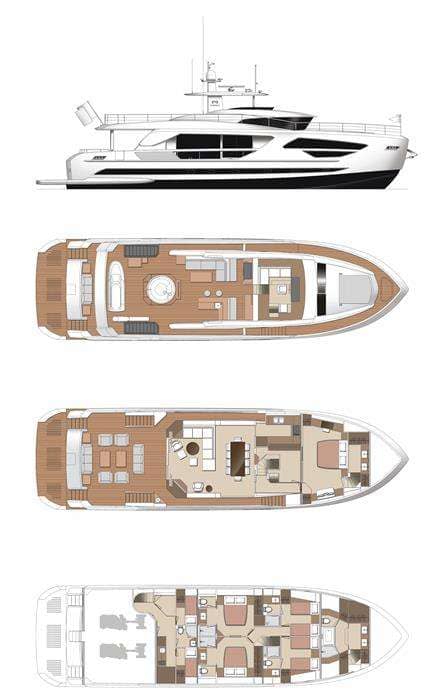 Angeleyes is the ultimate charter yacht; coupling an exceptional crew with a new yacht offering more volume than many 100 footers. Angeleyes is the perfect choice for guests looking to experience the most fun and luxury possible on a Caribbean charter!

Angeleyes is an stunning example of the Horizon FD85’s design concept: to take advantage of the voluminous 24′ beam and provide areas, both indoors and out, for charter guests to enjoy the ultimate yacht for entertaining and relaxing. Angeleyes’ main salon incorporates huge floor-to-ceiling glass windows, allowing guests to enjoy the ever changing island view. The interior dining table can seat 8 and can be used for more formal dining, with another large dining table on the aft deck for 10 when guests prefer to dine alfresco. The interior is modern yet comfortable, mixing elegant Wenge and Sycamore woods with brand new for 2019 neutral soft goods, furniture and upholstery upgrades.

With a huge 24’ beam Angeleyes offers a cabin layout and volume unmatched by similar sized motor yachts. She offers 5 double, en-suite cabins, making her the perfect choice for a group of 5 couples. Angeleyes offers an on-deck master suite with a huge master bath complete with rain shower and jacuzzi tub. Below deck are 2 walk around VIP suites with Queen beds and 2 staterooms with 2 twin beds that both have the option to convert to King beds if preferred.

Her spacious aft deck and open flybridge invite quality time spent with family and friends. The flybridge is the perfect space for guests to all relax together, with multiple seating area, a large hot tub, full wet bar and pop up outdoor TV that can swivel 360 degrees to enjoy at any angle.

Angeleyes comes equipped with a brand new, state-of-the-art Novurania 24’ tender with 200hp outboard. This tender in uniquely fitted with a drop down bow step, which means the tender can be driven right onto the beach and guests can step directly from the RIB onto the sandy shore without ever getting wet!

Crew Profiles:
Captain Darrel
Darrel grew up in Johannesburg, South Africa, where he spent his time prowling the suburban jungles and raising his pet lion, Chaos. He also managed to actually finish school, and spent several wasted years at university studying a surprisingly varied and random number of subjects, all of which are totally useless in his current job. He is also a lieutenant in the South African National Defense Force – salutes are optional on board. He speaks three languages, two of which are only spoken in South Africa.

In 2003 he decided to quit his job and give up the exciting life of an accountant, and go to sea. He moved to Cape Town in South Africa, to complete his captain’s license. After several months of sailing some of the roughest waters on the planet, he finished his qualifications, and is legally allowed to captain small dinghies in several third-world countries. He has lived and sailed in the Caribbean for the past fourteen years, sailing on a variety of vessels in the charter industry. He has extensive sailing experience throughout the Caribbean, and knows where to find the best bars on most islands, some of which may let him come back again. In his travels he has swum with dolphins, had humpback whales breach right next to (and almost land on) his boat, and sailed through a hurricane. He is keen to experience two of these three things again. He is an experienced and seasoned sailor, with over 45,000 nautical miles logged and over 400 charters successfully completed.

Chef Jenn
Jenn grew up in Canada (in a well-known haunted house, no less!) but has strong family ties in the islands. She visited the British Virgin Islands for twenty years, before finally taking the leap five years ago to make the switch and become a local. Along the way she has managed a jazz club, been a make-up artist, worked as a realtor and captained a space simulator. Her move has worked out well, as she brings her considerable experience in the hospitality and food industries on board. Our guests continue to rave about her gourmet cuisine, and guests are advised to bring loose-fitting clothing for the return trip. Naturally friendly and engaging, Jenn will win you over with her home cooking and cheerful vibe.

Jenn comes from a family of chefs, and has worked in the hospitality industry for many years. Her experience comes from restaurant management and hands-on learning. She has three years of experience in the charter yacht industry, and brings all her varied experiences to bear when creating her delicious meals. Jenn is a versatile chef who works closely with guests to come up with a charter menu tailored to their personal preferences. She enjoys using locally-grown foodstuffs, and tries to incorporate a farm-to-table approach in her cooking. She has amazing contacts and local suppliers down here that assist in this, and she strives to incorporate healthy and wholesome nutrition in her delicious meals. Her favorite culinary creations are classics with a twist, or anything where people ask for more.

A keen beach bum, Jenn’s love of the water and the island life are a perfect fit for the charter lifestyle. Combine that with her warm and caring nature, and it makes her everyone’s favorite crew member. She is a sunny, genuine, friendly soul, and we are very happy to have her on board as part of our team.

Mate Remi
Remi was born in Mauritius (an island in the middle of the Indian Ocean, for the geographically-challenged), but spent most of his formative years living in South Africa. He boasts two first languages, and speaks French and English fluently. In the Caribbean, he generally uses the French to impress naive female tourists in bars. This seems to work very effectively. Remi completed his degree in Environmental Management in South Africa, and worked as a mixologist and surf coach before selling his car to buy a one-way ticket to somewhere boaty. He has been in the industry for four years now, and has sailed far and wide in his travels. He has recently completed his captain’s ticket, and is sometimes allowed to stand in the pilothouse and look at all the shiny controls, although Darrel sleeps with one eye open lest the troops mutiny.

Remi is an avid surfer, and loves any excuse to get out on the water. He would be more than happy to get involved with any of the water-sport activities offered on the boat, and has years of experience in teaching a variety of board sports. He has also spent a lot of time on both sides of the bar counter, and loves showing off his skills should you need him to whip you up an amusing cocktail. There is an ongoing contest on board as to who mixes the best drinks – thus far, Jenn’s Mai Thai leads the polls, with Darrel’s Short But Strangely Satisfying Island Iced Tea a close second, although Remi is mounting a strong challenge with his Tomato and Basil daiquiri. You be the judge.

Remi is a genuinely pleasant and likable guy, and his easy-going and affable nature means you are bound to leave the boat as firm friends.

Stewardess Jenny
Jenny was born and raised in Scotland (part of a large island just west of France, for the geographically-challenged), the daughter of two avid divers, so her childhood was spent bobbing around on dive boats and learning to love the water from the inside of a wetsuit. The only one of us who actually has some schooling in the hospitality industry, Jenny holds a degree in hotel management and catering. She spent several years working (and later managing) various hotels and restaurants in Edinburgh, before making the leap and moving to the BVI. She has lived here for more than two decades, although her accent still leaves no doubt as to which rugby team she supports. She has worked on boats as well as owning and managing restaurants on island in that time, and knows everyone and everything island-related.

Jenny is one of those people with boundless energy, and don’t let her diminutive stature fool you – she’s feisty. Happy and sunny and feisty. Her previous experience and varied skills means she can fit in wherever she’s needed, so you may find her helping in the galley; pouring liberal drinks behind the bar (the Scots, like the BVIslanders, like their drinks strong); or you may not see her at all but just be pleasantly surprised by the magical and fragrant cleanliness and tidiness that happens wherever she goes. Jenny rounds out our team by striving, as we all do, for the three F’s: Friendliness, Flexibility, and being Fenomenally good at the job. 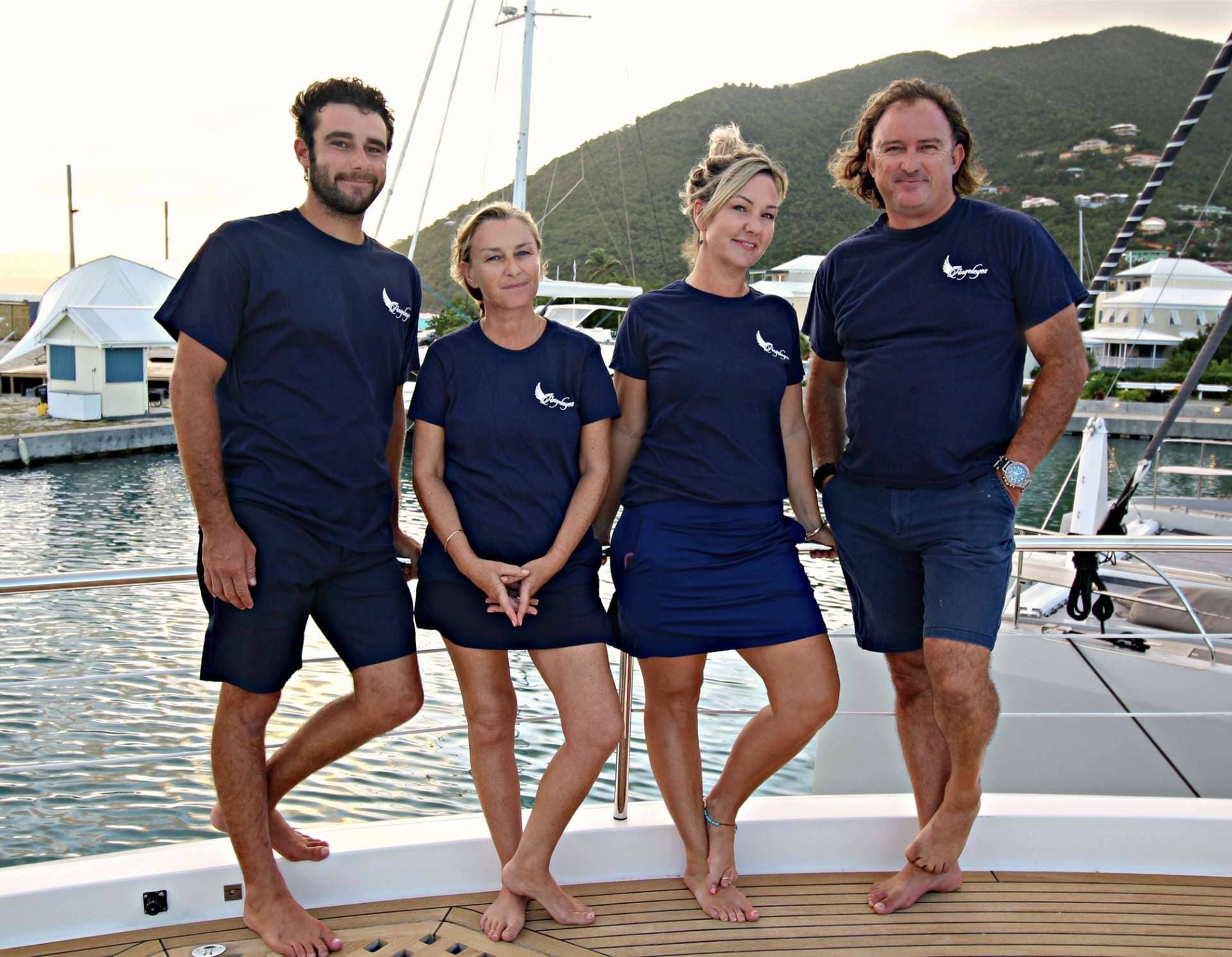